Justin Bieber's hair sold for US 40,668-00
Be innovative, there are money to be make everyhair....
sorry, I mean everywhere. 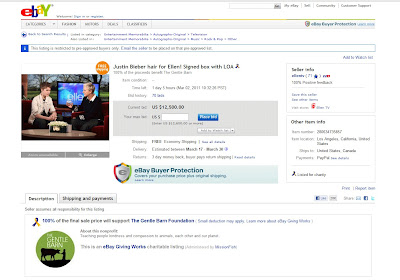 What would you pay to get your hands on a clutch of Justin Bieber's hair? Maybe nothing whatsoever, but in some rooms, that would put you in the minority. Apparently, some people are eager to pay thousands of dollars for one of Justin's recently snipped, light-brown locks. Last week, the Biebs made a surprise appearance on the Ellen Degeneres show and brought along a jar of his hair. He told the talk-show host, "We’re doing something special. We want you to donate it to whatever charity you want to."
Ellen chose to auction the hair off on eBay and donate 100 percent of the proceeds to Gentle Barn, a charity that rescues and rehabilitates abused and neglected farm animals.
The auction is going on now, with the high bid at $15,000 (and counting). If you want to place your dibs on strands of Bieber love, do it soon: bidding ends on March 2.
If you don't have thousands of dollars to give away, but still have Bieber fever, the pop star is turning 17 on March 1 and is urging fans to make a $17 donation to Charity: Water. Bieber hopes to raise $17,000 to build clean water projects in developing countries. 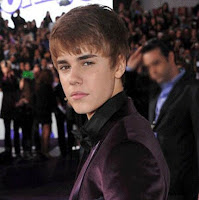 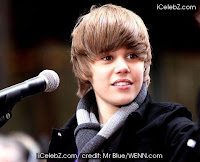 When it comes to marketing, I guess nobody can beat the
Americans. They can relativity sell anything to anybody....
even refrigerators to the Eskimos.
Now, we shall see if this kid really got the talent or just a Baby Samson. 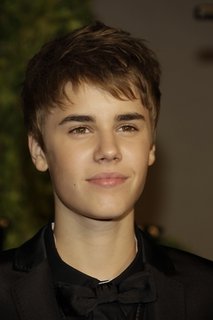 –
Wed Mar 2, 7:54 pm ET
NEW YORK – Justin Bieber's hair is officially the stuff of legend: His hair clippings have sold for more than $40,000 on eBay.
After the 17-year-old pop sensation chopped off some of his famous locks, he brought the clippings to the "Ellen" show. Host Ellen DeGeneres put them on eBay.
When the bidding ended, the clippings went for $40,668. The proceeds are being donated to The Gentle Barn, which rescues neglected and abused animals and uses them to help disadvantaged kids.
Bieber's magic touch continues. He's got two albums in the top five on the U.S. album chart this week, and his movie, "Justin Bieber: Never Say Never (3-D)," has grossed almost $70 million at the box office since its release last month.

Posted by RobestYong at 5:58 AM