Could this be our Answer to the Dengue Problem? 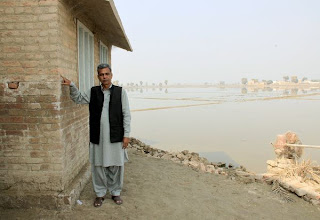 In December 2010 a Pakistani man points to the height of floodwaters that swept through the village of Sindh in August.
At their peak, the flood waters were up to 20 feet (6 meters) deep in Sindh. By the time this picture was taken, the man's fields—seen in the background—were still under three feet (about a meter) of water.
"Officially, the humanitarian emergency response phase is over," Watkins said. "The focus now is very much on getting people's livelihoods back. We're working with the government of Pakistan, the UN, and local partners to help do that." 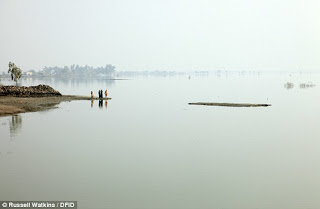 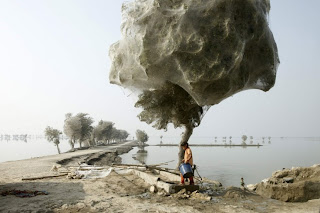 Seen in December 2010, a young girl stands next to a tree covered in spider webs in Sindh, Pakistan, near the intersection of two roads that had only recently reemerged from floodwaters.
At the height of the crisis, the flooded region covered an area the size of England. Nearly 2,000 people died during the disaster and 20 million people were affected, according to the Pakistani government.
"More people were affected by the flooding than the combined total of the Boxing Day Indian Ocean tsunami, 2005 Pakistan earthquake, [2010] Haiti earthquake, and Hurricane Katrina," John Barrett, head of DFID's Flood Response Team, said in a statement.
As part of the international response, DFID mounted the U.K.'s largest humanitarian operation yet. 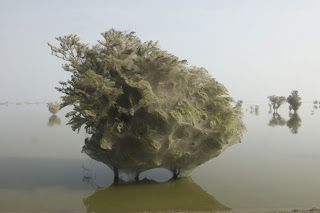 Trees rising above the floodwaters became safe havens for web-spinning spiders in Sindh, Pakistan, as seen in December 2010.
Most of the floodwaters in Sindh and the surrounding region have now receded, and people are slowly returning to what's left of their towns and villages.
"Virtually 90 percent of displaced populations in Pakistan have returned, but most of the communities that were there were completely destroyed," Watkins said. 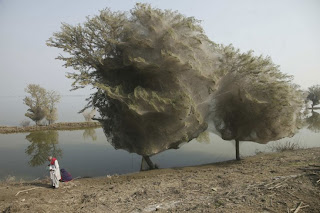 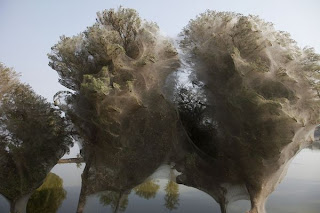 Cocooned trees line the banks of a flooded rice paddy in Sindh, Pakistan, in December 2010. According to Watkins, the subsequent deaths of many of the web-covered trees has created a new problem for the residents of Sindh.
"The area is incredibly hot in summer, and there is very little natural foliage cover for people to use as shade to begin with," he said. Without the trees lining roads and fields, there will be little refuge from the summer sun. 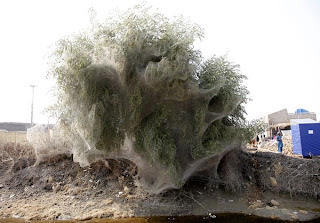 A spider web enshrouds a tree in Sindh, Pakistan, in a December 2010 photograph.
The unusual cocoons were a mixed blessing: The huge webs ultimately killed many of the trees they covered, perhaps by reducing the amount of sunlight reaching their leaves.
But for a while, the webs also seemed to help trap more mosquitoes in the region, thereby reducing the risk of malaria, Watkins said.
Normally after a flood, the remaining stagnant water provides more opportunities for mosquitoes to breed. But people in Sindh reported far fewer mosquitoes than expected following the recent crisis.
Posted by RobestYong at 5:43 PM