They say there's a gadget for just about everything. That now includes boots which detect radiation and a kangaroo tail for weary humans who'd like a rest but can't be bothered to sit down.
These and a thousand other devices went on display Wednesday at the world's biggest inventions fair, where exhibitors from 45 countries showed off their weird and wacky designs in Geneva in the hope of attracting investors or buyers.
Peyman Sarhadi of Iran showed off his "super smart boot," which he hopes will become the Swiss army knife of footwear.
Equipped with sensors, it collects data on air temperature, humidity, location and the wearer's blood pressure, and then sends the information to a base camp. It can heat or cool the feet and can also measure radiation levels, a feat that might be useful given Iran's reputed nuclear ambitions - peaceful or otherwise.
Sarhadi claims the boot is already being tested by the Iranian army.
"It's useful," Sarhadi said in a remarkably understated sales pitch.
Emanuele Lopopolo of Italy presented a portable backrest that allows its wearer to take a break from standing by leaning back onto a telescopic pole.
"The kangaroo can rest its weight on its tail, so we've made the same thing for humans," he said, reclining at a 60-degree angle while passing spectators did their best not to trip over the pole.
Miracle tinctures and obscure industrial equipment aside, visitors may find the most useful inventions include a mouthwash-dispensing toothbrush, a braille photocopier, a foldable tandem bike and a vertical garden.
Jean-Marc Batard said the idea to build his pyramid-like garden came from his experience running a retirement home, where many elderly people complained about not being able to pursue their love of gardening because it was too hard for them to bend down.
The Frenchman came up with a modular wooden frame that can be modified to suit the gardener's horticultural preference - and reach.
While many inventors enjoy support from their governments or universities, some have invested large sums of their own money in unlikely gadgets in the hope of someday hitting the jackpot.
"I've spent €50,000 ($71,500) on the prototype, now I need an investor to make it in bulk," said Roberto Capomazza, demonstrating what he claims is the fastest shrimp peeling device ever invented.
And why did he devote so much money toward developing a rather simple kitchen implement?
"I love shrimp, but I hate using my fingers to peel them," he replied. 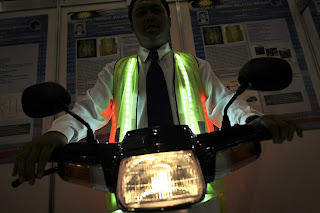 Malaysia's Mohd Farriz Basar poses with his invention, the smart motorcycle safety vest .
The safety vest is connected to the motorcycle's breaking mechanism and indicators so
as to provide better visibility to other drivers 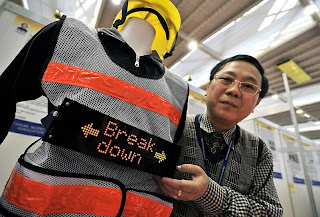 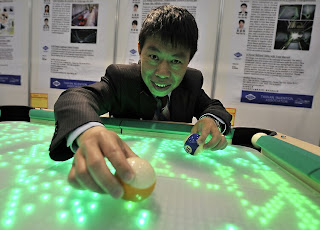 Southern Taiwan University's Tang Jing-Jou poses with his invention, a billards table with
trajectory recording capabilities during the opening day of the 39th International Exhibition
of Inventions, on April 6, 2010 in Geneva. The billard table is designed to have sensors and
LED indicators under its surface used to record the trajectory of the ball and show the strength in every shot. 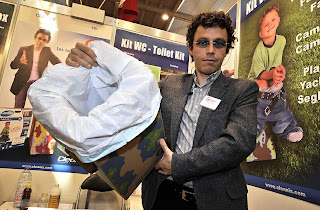 France's Laurent Helewa poses with his invention, a toilet kit.  Helewa's invention is a foldable
and reusable system of a dry, portable disposable toilet designed for nomadic, family or even
military use in case there is not a functional toilet 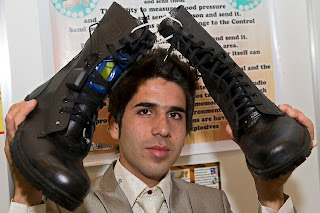 Iranian Payman Sarhadi presents his "super smart boots". Equipped with sensors,
it collects data on air temperature, humidity and the wearer's blood pressure,
and then sends them to base camp. 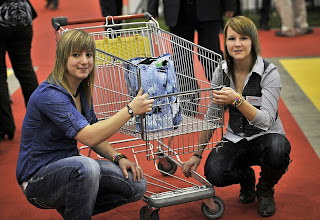 Switzerland's Marie Guerry (L) and Julia Vauche pose with their invention,
a shopping trolley with an opening system for easy unloading of goods without lifting them. 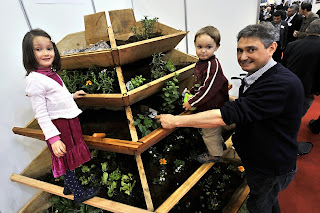 France's Jean-Marc Batard pose with his children next to his invention, a pyramidal
water-saving garden which allows elderly people to garden. 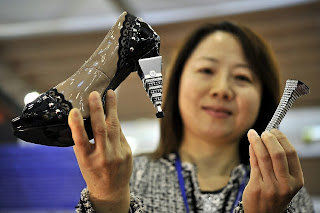 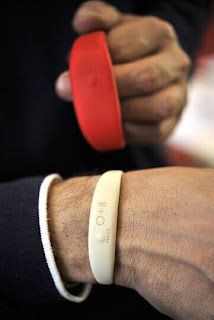 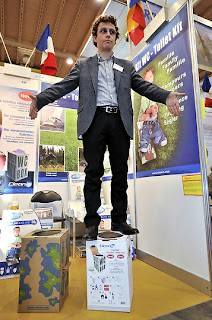 France's Laurent Helewa stands on his invention, a toilet kit. Helewa's invention is a
foldable and reusable system of a dry, portable disposable toilet designed for nomadic,
family or even military use in case there is not a functional toilet nearby
Posted by RobestYong at 5:17 AM