The STAR
Date: 15th September 2011
PETALING JAYA: Memories come flooding back for Malaysian inventor Robest Yong as he reads old stories in The Star.
Of particular interest to him is the Letters section as he has been a contributor to the section since he was 13 years old.
At that time, in the early 70s, it was known as The Star's Live Letters.
“It brings back many memories when I would write to the newspaper each week and wait for it (the letter) to be published.
“My first letter to The Star was in 1973, and I still keep all the letters. 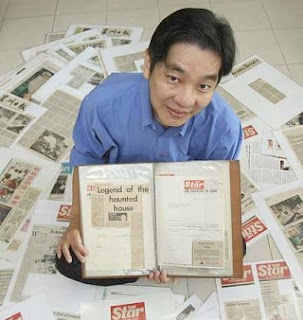 Love for writing: Yong showing his collection of letters published in The Star.
“I am also a loyal reader who grew up with The Star and have seen many changes in the newspaper,” he said yesterday.
Yong said he came from a poor family and writing became a form of escapism for him during his school years.
“I have 11 siblings and we lived in a small village in Nibong Tebal.
“With the RM5 I got each time I contributed to the Live Letters section, I did not have to ask my parents money for my personal expenses.
“Writing has always been my passion and I am now writing my autobiography, which will be published soon.
“Sometimes, I write to the Letters section but I now focus more on innovation and science topics,” he added.
Yong was named the 1994 National Inventor Of The Year, 1994 Gold Medal winner at the Geneva International Invention Exhibition and 1997 National Youth Of The Year (Innovation & Creation).
He also scored a gold at the London International Inventions Competition in 1998.
Yong, a father of one, was also appointed as a consultant for the Special Innovation Unit under the Prime Minister's Department to draft the new National Innovation Policy.
He said The Star was very interactive and had improved significantly throughout the years.
“The content of the newspaper has changed tremendously, especially with a special section for inspiring stories.
“I believe our children and students should have a local hero or heroes to inspire them,” he added.
Read it from TheStar:
http://www.thestar.com.my/news/story.asp?file=/2011/9/15/nation/9504330&sec=nation
Posted by RobestYong at 7:18 PM